In order to keep a baby’s skin protected, it is possible after cleaning to add a thin layer of ‘barrier cream’ to your baby’s bottom, which will act like a light film between skin and ammonia and dampness. These creams need to be light so they allow the skin to breathe whilst being protected.

Severe inflamed nappy rash is far less common than milder soreness caused by dampness (or thrush). Nappy rash whether light or more severe is caused when skin is irritated by the ammonia that arises from bacteria in faeces coming into contact with urine. However, if you have a couple of reliable creams or ointments in your changing bag these can usually ward off most uncomfortable skin outbreaks when you also observe good changing habits (see Avoiding nappy rash for tips).

When your baby actually does have a rash it’s good to try to nip any outbreak in the bud. Sometimes changes of diet, teething and other shifts in habits can trigger a rash, so don’t feel you have failed your child – just catch it as early as you can.

If the rash appears as spots that start around the back (anus) and sometimes spread to buttocks and thighs, it might be thrush, for which you may have to get a treatment from your doctor (see also Canesten below).

Nappy rash itself tends to first appear with redness around the front (around the genitals) rather than the back, but in severe cases it can spread to the back (around the anus) and the legs. In bad cases it may cause the skin to be raised and broken. With nappy rash you may also notice a smell of ammonia. 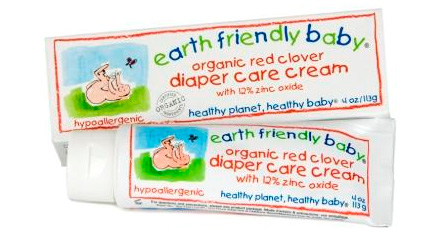 Earth Friendly Baby Organic Red Clover Diaper Care Cream: with botanical extracts of red clover combined with zinc oxide, this light cream has a naturally soothing effect on mild nappy rash and other skin irritations. It is unscented and hypo-allergenic so it’s worth a try if you want to see if something light will clear up the problem. 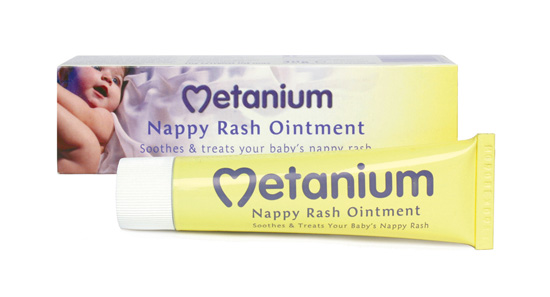 Metanium: whilst some parents find that a mild rash disappears if they let their baby’s bottom air more frequently and practice good nappy health tips, Metanium is a great nappy rash treatment (not a barrier cream) which can be used as soon as a rash appears, even on the youngest baby. It is a thick ointment and can be used sparingly. Although it feels thick and smells ‘medical’ it is lanolin-free and gentle enough for your baby’s sore skin, usually beginning to remedy the problem within the first day of use (lighter rashes they may even be gone by the next nappy change). Although it is very creamy, the titanium salts in its formula allow a baby’s skin to breathe healthily which aids fast recovery. There is no need to use it as an everyday cream, but keeping a tube handy for the first signs of a rash is a good idea.

Canesten cream: candidal nappy rash is a fungal infection and therefore requires an anti-fungal treatment. If the nappy rash hasn’t cleared up after a few days with regular nappy creams consult your doctor or health visitor as it might be possible to clear the problem up with Canesten. If buying Canesten cream, make sure you tell the pharmacist that it is for your baby and not you.

See your GP if a treatment and good nappy habits don’t seem to be working after a couple of days – in a few cases the problem could be a different skin issue such as a form of eczema, or a reaction to something which requires medical attention.

Read more in our Buyer’s guide to barrier creams.