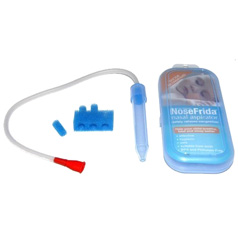 Young children cannot blow their noses and this disturbs their sleep, how they eat and their general well-being. The NoseFrida nasal aspirator is an effective way of reducing congestion in children aged 0-3.

NoseFrida has been developed and produced by an ear, nose and throat doctor and meets all the demands for safety and hygiene both for the child and the user.