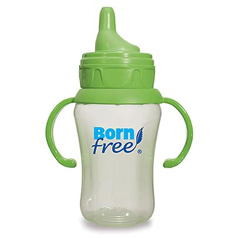 This toddler drinking cup is also made from BPA-Free plastic and has hard spout and a low vacuum valve, allowing a free flow of liquid and reducing the risk of middle-ear infections. Suitable for 9+ months. Available in Blue, Green, Pink and Yellow.